We were writers. Our identities were forged by our actions. If anyone was to ask, our response was to be: I am a writer. We could say this in part because we were with others who would respond: we are writers, too.

We sat at a small concrete park with our notebooks on our laps. Across one street, people gathered outside a homeless shelter. The sound of construction across the other street—another building in the revitalization of this downtown area—drowned out the animated conversations of those milling about the park, people who knew the place well enough to know we were not a normal part of it.

We had dedicated four weeks of our summer to reading and writing. We had our own reasons for coming and our own reactions to being there. And when the time was done, we went our separate ways.

Through the weeks there was one true constant: the river was flowing. We spent time writing each morning, some of us by the windows that overlooked the city, the river directly below us, a peaceful and pristine vignette that belied the rockiness and pollution. 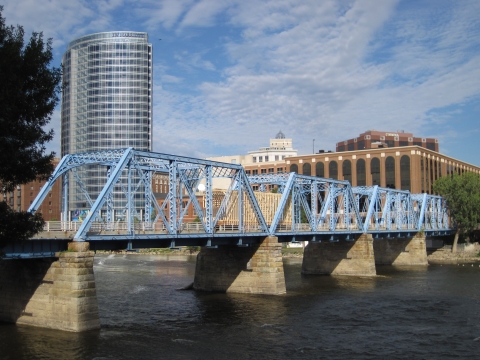 In the morning, when the sun was reflecting off the water, the true nature of the river revealed itself. Thousands of glittering ripples, like clamoring paparazzi, spoke of the flow’s forceful and relentless turbulence. But there were other places where the water was smooth, where things looked still. On the lee side of the cutwaters—the rock columns that support the bridge—the river seemed to turn back on itself; it was as if this shadow would provide some escape, as if the force of the water coming back might hold us against the stone pillar.

Here perhaps, if only for a time, the river might just stop.

After the four weeks, we rejoined the flow, as all must. We became part of that river again, the river that flows not with time’s measured pace, but with swirls and eddies that disorient, over and around rocks that batter without mercy.

We lingered in the stillness of our writing community awhile; we had spent more time together than with our own families. For some of us at least, the time and quiet allowed something to find footing in a place some of us never knew existed. To those who have not discovered that place, who have not found its home, we have only three words, which we will share over the noise of construction in a concrete city park.