I stood back and watched as my children waited 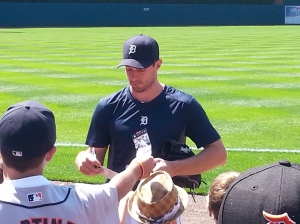 along the fence seeking Max Scherzer’s autograph. They were crowded in with everyone else, arms raised, holding out baseballs or cards or something else to be signed. Annie, Jack and Charlie had only their printed tickets from Stubhub, not a very special souvenir. But they succeeded and were thrilled.

Our seats, as usual, were considerably more removed from the game: upper deck, down the third base line, where players are recognizable for their position more than anything else. These are the seats we generally afford. 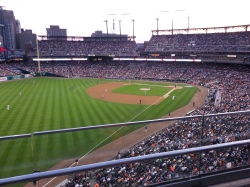 Because it’s the sort of thing fathers do with their children, I struck up a conversation: Which of the players, I asked them, would they want sitting next to them, right now, watching the game? The obvious answer was Miguel Cabrera, but after discussing other possibilities, we agreed on Torii Hunter, based on star quality but also personality: it was easy to imagine having a conversation with him, sitting high up in the stands with empty seats all around us, no one crowding around to compete for his attention.

As we watched the game, I found myself wishing that Torii Hunter was sitting next to me. I would break the ice by telling him that we once ate at the same Cheesecake Factory in Chicago back when he was with the Twins except the waiter told us that he was the backup quarterback for Minnesota and we never realized it was him until we left. And we would laugh. We could talk about baseball and being dads and find other things we had in common, and it wouldn’t be about autographs or fame or anything—except he was still the Tigers’ right fielder and would be rejoining the team. But when he waved from right field like he often does, it wouldn’t be just him waving to the crowd, he’d also be waving to me and acknowledging the time we’d spent together, high up in the stands surrounded by empty seats watching a ballgame together.

I was struck by the disparity of those two images: Max Scherzer on the other side of the fence, flanked by security and facing dozens of autograph seekers; and Torii Hunter hanging out next to me in the cheap seats. The first is my default image of God, and to Him I am just one of many needy people holding something out hoping to get his signature so I can take it home as some sort of proof of something. The second, though, might be how He views things: the two of us sitting at a ballgame, surrounded by empty seats and talking about baseball and fatherhood and how evil the Yankees are and Torii Hunter’s near-miraculous catch into the Fenway bullpen. 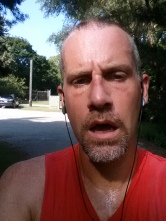 But neither do I run to feel like this (because it really doesn’t happen):

Instead, I run to see home in the distance, to know there is a shower and a couch ahead, to put one hopeful foot in front of the other if only to keep momentum going, if only because–for the time being–it is my sole purpose.

Likewise, I don’t write (in pursuit of publication) to receive something that looks like this: 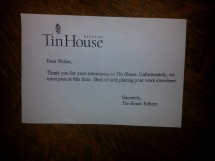 Just one of many. (Most of them these days are digital.)

But neither do I write to feel like this (although sometimes, pathetically, I do):

Rather, what pushes me and inspires and drives me is something like this: 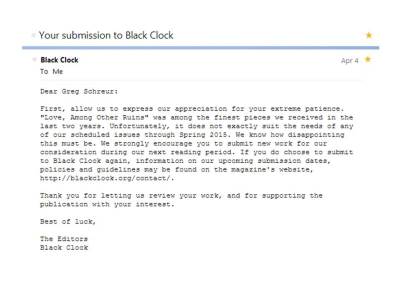 Instead, I write to see publication in the distance, to know there is a byline and a contributor copy ahead, to put one hopeful word in front of the other if only to keep momentum going, if only because–for the time being–it is my sole purpose.

We know we love something–or maybe we know we’ve found our special purpose*–when we’ll happily fail at it, when we’ll gladly sweat and struggle and stumble and still take those sad uncertain steps toward an end that is somewhere around the corner.

Find the thing you’ll happily fail at, the thing you can botch and blunder, flop and flounder, and return to over and over as if the end is just ahead.

Not surprisingly, this is the hardest thing about writing: getting ideas onto the page, going from Notion to a Physically-Written Articulation. And there’s also no shortage of advice about what’s behind this Writerly Procrastination: lack of discipline, not enough freedom to fail, wrong kind of workspace, not enough prep writing, no identified audience, the inner critic’s too loud, [enter here the most recent article you saw about how to get yourself to sit down and f-ing write].

I thought I was standing in a spot I’d never been, even though I’ve lived in Grand Rapids all my life.

I’d been walking around all afternoon on a writing marathon, stopping at various locations with fellow writers Erica and Colleen to write, and have a beverage. They were younger, hipper, city-dwellers, so they graciously lead me around until I finally looked up—and felt lost, displaced.

“I don’t know that I’ve ever been in this very spot,” I said, more realization than admission.

The building straight ahead, which didn’t look like anything I’d seen in Grand Rapids, reminded me of Boston—where I’d been twice, but only briefly, with my family. Very Bostonian, I may have thought, proud of myself for being so well-traveled and architecturally astute: yes, I do believe it was from the Bostonian period.

But apart from my pathetic, worldly hubris, it was oddly unsettling being in such an unexpectedly unfamiliar place, a sudden alien in my own hometown.

Then we reached the end of the street and turned the corner.

The building in question is to the left of me. I have no idea if there is anything Bostonian about it.

A few weekends before, there was a festival with food and art and music. Streets closed to traffic filled with people walking or waiting in line forfood or listening to one band or another. I’d gone on Friday afternoon, and there, directly across the street from the corner where I was standing—my two writing companions at my side—I had been captured on local television, cramming souvlaki into my mouth.

All I had done was turn the corner and voila! I instantly went from being somewhere I’d never been to a place I’d been often—and just recently.

Of course, not really. Really I’m just pretty stupid—and unaccustomed to having a beer at lunch. But also: perspective can be a tricky little wench. She turns out the lights and silences all the voices calling out “We’re here, we are here!” And that darkness becomes our world, our past-present-future. Oh, then, if only we would turn the corner and search the wall with hopeful fingertips for that switch that would change everything. 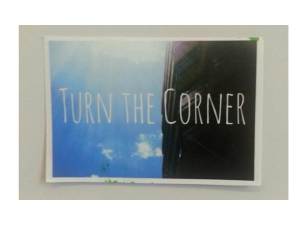 I needed the reminder this past year. Thanks for the magnet, Erica.

All I had done was turn the corner, and I went from being somewhere I’d never been to a place I’d been often—and recently.

Note to self: remember, turn the corner.

Note to my children, my students, and you, patient reader: turn the corner.

The question is this: Do you call yourself a writer? Mostly it’s a pointless question. Except maybe for English teachers. A vast majority of them, I’ve found, aren’t comfortable claiming to be a writer, which is a shame. However, there are interesting parallels to other labels we might claim: Do I call myself a runner? How do I claim my faith? Have I reached super-fan status yet?

So, what are the risks of calling yourself a writer?

Isn’t everyone who writes a writer?

So, what writing counts? Can a grocery list count? Well, I suppose, if there is craft and process, by all means it could be.

So, if I’ve written a grocery list haiku, I’m a writer? Uh…

Well, what about this: what makes someone a Detroit Tigers’ fan? At what point can they call themselves a fan and sport the team’s garb?

As far as I can tell, anyone can call themselves a fan. It’s more of a question of should.

So is there a certain obligation to wearing a Tigers’ shirt?

As a serious fan, it is misleading and annoying when someone somehow proclaims himself a fan but then knows nothing about the team–or worse, just one or two things. Don’t call yourself a fan if you don’t want to (or can’t) talk about the team, or if the only thing you can say is “Well, doesn’t that one guy really suck.”

So how about the rewards?

So, can anyone call themselves a writer? No, I don’t think so. But if you want to claim that title, there is one thing you can do to change that: get writing. And at some point, you will sit back, cross your arms or stroke your chin, smile, and think, “I am a writer.”

*this satisfaction results more from past action than the claim itself

Further Reading on the topic:

Tasha Golden on the Ploughshares Blog